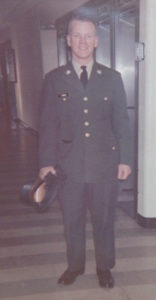 He started his career at Western Electric (AT&T) in Omaha that same year. He worked there for 42 years and retired in 2006.  On December 4, 1965, he married Nancy (Bergman).  To this union they raised two children, Deborah (Jones) Myers of Lincoln and Brian Jones of Greenwood.

Carl was inducted into the Army, December 20, 1965 and Honorably Discharged on December 19, 1967.  He served during the Vietnam era.  At that time he returned to his job at Western Electric.  He later took over the family farm from his father-in-law.  He called it his hobby and worked it with Brian until his passing.

Carl was an avid outdoorsman.  He enjoyed deer and pheasant hunting.  He had many good times with friends and family.  Carl was Past Master of the Pomegranate Masonic Lodge in Ashland and was a member of the Sesostris Shrine Temple and served as Secretary of the Platte Valley Shrine Club for over 20 years.

Carl leaves behind his wife, Nancy, of 55 years.  His son, Brian.  His daughter, Deborah and son-in-law, Jeff and Granddaughter Andrea.  He is also survived by his brothers, John Jones and Tom (JaNelle) Jones of Murdock; sister, Elaine (Mike) Royce of Gretna; sister-in-law, Sandy Webb of Texas.  Many nieces, nephews and cousins.  Close friends, Tom and Chris Rosencrans of Omaha.

Carl was preceded in death by his parents; father and mother-in-law, Elmer and Irene Bergman; sister-in-law, Colleen Jones; and niece Kim Jones.