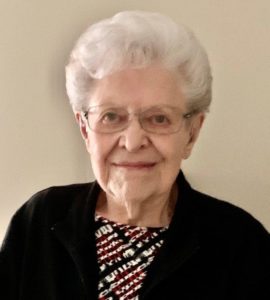 Arlene M. Erickson, 94 of Lincoln, formerly of Wahoo passed away Monday, April 25, 2022.  She was born May 26, 1927 in Wahoo to Harry and Ruth (Wolter) Schmidt.  She graduated from Wahoo High School in 1945 and later graduated from Luther College in Wahoo.  Arlene worked for the Superintendent of Wahoo High School for many years.  She was united in marriage to Donald L. “Jake” Yarmon on September 20, 1947 in Wahoo.  From this union two children were born, Michael and Julie. In 1971 Jake passed away.  On August 10, 1974 she married E. Gerald Erickson.

Arlene was a former member of the First Congregational Church in Wahoo.  She enjoyed playing Bridge/cards, crossword puzzles, traveling and cooking family meals.