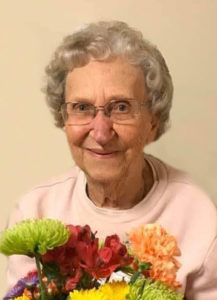 Bernadette “Bernie” M. Woita, 95, of Wahoo, NE, entered into eternal rest surrounded by family on Tuesday, August 2, 2022 at South Haven Living Center, Wahoo, NE.  Bernie was born January 9, 1927 near Plasi, NE to Joseph and Anna (Carek) Maly.  She attended Wahoo Catholic High School through the 11th grade and in 1944, she graduated from Wahoo High School.  On February 22, 1949, Bernie was married to Raymond Woita at Sts. Cyril and Methodius Catholic Church in Plasi, NE.

Bernie was a long time member of St. Joseph Catholic Church in Colon, NE where she was a member of the Altar Sodality.  She was a member of the Catholic Daughters of America and the American Legion Post #265 Auxiliary.  Bernie found great joy in gardening, traveling to Switzerland and the Czech Republic with family members, as well as quilting.  She made a quilt for each of her children in the pattern and color they selected.  She also pieced a quilt for each grandchild as a high school graduation gift.  In her later years, she made baby quilts for her great-grandchildren.

Bernie’s favorite pastime was baking.  She and her sisters, Isabelle and Virgie, spent hours talking about new recipes and minor changes to family favorites.  She gave numerous kolache baking lessons to children and grandchildren.  Many other traditional recipes were passed down through the generations: apple strudel, cherry buchty, houska, and date candy at Christmas to name a few.  Her baking skills did not diminish with age.  She continued to bake until it became necessary for her to move into the South Haven Living Center.  She even baked all the kolaches for the open house celebrating her 90th birthday.

She was preceded in death by her husband, Raymond Woita; parents, Joseph and Anna Maly; siblings, Isabelle Tvrdy and Virginia Lanik.