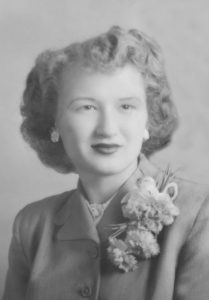 Bonita “Bonnie” E. Arney, 82 of Wahoo, NE passed away Tuesday, October 3, 2017 at Bryan East Medical Center in Lincoln, NE.  She was born October 31, 1934 in rural Touhy, NE to Julius and Frances Zetocha.  She attended grade school in the Touhy area and was confirmed at St. Vitus Catholic Church in Touhy. Bonnie was united in marriage on January 2, 1951 to Donald F. Arney in Council Bluffs, IA.

Bonnie worked as a waitress for Fairview Café and as part of the janitorial staff at the Saunders County Court House. She enjoyed antiquing, crossword puzzles, Keno and loved to play Bingo.  Her passion was her family, she loved spending time with them.  She was a member of American Legion Auxiliary Post #82 and Post #273.