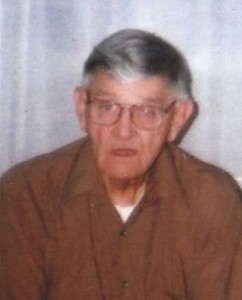 Carl A. Harpin, 87 of Ashland, NE, passed away on Monday, July 7, 2014 at the Ashland Care Center in Ashland.  He was born April 4, 1927 in Creston, IA to Arthur and Grace (Sowash) Harpin.  Carl graduated from Creston High School in 1944 and then entered the U.S. Army.  He served his country until being honorably discharged in 1947.  On June 14, 1958, he was married to Denece Jones at Howard Schofield’s country home in Ashland.  Carl spent over 45 years working for the railroad until he retired in 1994.  He also worked in maintenance at the Ashland Country Club and for many years he worked on Saturdays for Mead Lumber.  In the later years he enjoyed crocheting and he loved watching all sporting events.

Pastor Andrew Moyer will be officiating.

Condolences for Carl A. Harpin