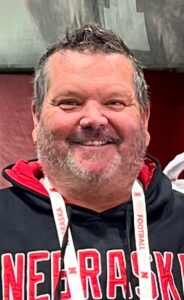 *The funeral will be live streamed on the Sts. Mary & Joseph Facebook page.

Sts. Mary & Joseph Catholic Church or in care of the family

CB Moudry, 55, of Raymond, NE, entered into eternal rest on Saturday, November 12, 2022, at his home in rural Raymond, surrounded by his loving family and friends.

He was born October 22, 1967, in Ord, NE to Alvin and Jean (Collins) Moudry.  CB graduated from Ord High School in 1986, where he excelled in football, wrestling and track.  He attended Iowa Western Community College, in Clarinda, IA where he played baseball.  He graduated with a bachelors degree in Parks and Rec. from the University of Nebraska.

On April 13th, 1996, CB was united in marriage to Kris Havlovic at St Patrick’s Catholic Church in Lincoln NE. CB enjoyed his many years working for the City of Lincoln’s golf courses.

CB was a very outgoing guy who never knew a stranger. Most all his friends would say he could make anyone smile. CB loved to be around his family and friends especially when he was cheering on the Huskers or watching the Tennessee Titans.  CB was his son’s biggest supporter, whether it was coaching baseball, football, or wrestling or cheering them on loudly from the stands. He never missed a game or activity. He loved being the father to his boys and most especially hearing about their achievements in sports or academics.

He is survived by his wife of 26 years, Kris Moudry; sons, Garret (fiancé, Erica Carlson) of Lincoln, NE and Trent Moudry of Raymond, NE; sister, Dana and Ken of Colorado Springs, CO; and many other family members and friends.

He was preceded in death by his parents, Alvin and Jean Moudry; parents-in-law, Ivan and Gail Havlovic.