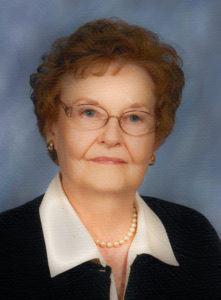 Cecilia Adeline “Addie” (Brukner) Ludi was born September 20, 1921 to Anton and Mary Brukner of Colon, NE. She passed away Saturday, April 10, 2021 at South Haven Living Center in Wahoo.  She attended Wahoo High School where she graduated in 1939. She was united in marriage to Derrel Ludi of Wahoo on July 18, 1944 at St. Joseph Catholic Church in Colon, NE and together they had two sons, Steven and Kevin.

Addie was a devout Catholic all of her life. She delighted in participating in the many social events of the Catholic Church and she was very active in the Wahoo community. Addie worked with her husband Derrel as the third-generation owners of the Wahoo Newspaper. It was family operated until being sold upon retirement in 1986. Addie took great pride in serving her country as a recruiter for the United States Navy. This she described, as one of her major life accomplishments.

She has spent the last decade at South Haven Living Center in Wahoo after suffering a stroke. She will forever be remembered as a loving mother, grandmother and friend to many.

Condolences for Cecilia A. “Addie” Ludi