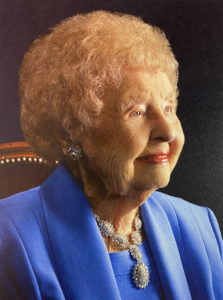 *The Rosary and Funeral will be live streamed on the Svoboda Funeral Home Facebook page.

Christina Rosalie Fiedler, 101, of Ceresco, NE, entered into eternal rest on Tuesday, March 16, 2021 at Saunders Medical Center in Wahoo, NE.  She was born June 2, 1919 in rural Brainard, NE to Theodore and Christine (Ratkovec) Kudlacek.  Christina graduated from Brainard High School.  On January 28, 1941, she was united in marriage to Henry Fiedler in Loma, NE.

Christina was a member of St. Mary Catholic Church in Davey, NE and she was a member of the St. Mary’s Altar Society.  She enjoyed baking, sewing and caring for her family.  She was a sweet classy lady that enjoyed dancing and polka music.