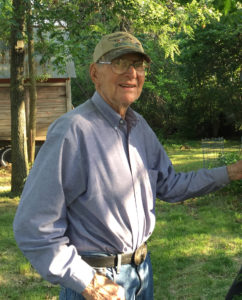 Clarence F. Pestal, life-long resident of the rural Wahoo area, entered the presence of his Lord on December 18, 2017.  Clarence was born on the family farm 3/4 miles north of the Czech Presbyterian Church on June 25, 1920 to John and Emily (Cejka) Pestal.  Their families were descendants of those who immigrated here from Moravia and Bohemia (present-day Czech Republic) in the late 1800’s.

The middle child of three, Clarence grew up harnessing the work horses and helping out on the farm.  He loved horses and rode often.  He loved listening to his grandfather Joseph pray, quote scripture and sing hymns in Czech on his porch in the evenings.  This made a life-long impression upon him, encouraging his own commitment to Christ.

Following school, Clarence went to do farm work as far as Iowa and Minnesota to earn money.  On November 3, 1941 he joined the army and received his basic training at Fort Leonard Wood, Missouri.  He was always so thankful that his parents came to visit him during his time there.  He was deployed from California via Hawaii to serve in the Philippines and New Guinea in the Pacific Theatre.  He was with the 6th Engineers and led an engineering team to work on roads, bridges and landing areas.  He was honorably discharged on November 7, 1945.  Clarence was proud to serve his country and also very thankful the Lord kept him safe throughout his years of service in World War II.

Clarence met Martha Marie Maresh at the last Czech Presbyterian Church Convention.  He saw her across the room and said he would really like to meet her. That meeting led to a long distance courtship and they were married in South Dakota at the Eagle Presbyterian Church on December 1, 1948.  He frequently reminisced that they took a 34 day honeymoon, and couldn’t imagine someone doing his chores for so long.  To their union were born Amy, Fay, and Chris.

Clarence and Martha lived on a farm southwest of Wahoo, where he raised corn, soybeans, wheat, and lots of hogs.  Martha would help with the hogs and however she was needed.

Clarence loved trees, and you could tell by their yard with all the many kinds of trees planted.  He also loved all kinds of flowers and plants and lovingly cared for them all.

Clarence loved the Lord Jesus and would encourage people to go to church.  During his lifetime he was part of the Czech Presbyterian and Calvary Church families.  He continued to be a disciple of the Lord through his last days–telling others how important it was to know Christ.

Clarence was a loving father who always wanted the best for his children.  He supported them in their school, church, and life activities.  Socializing with family, friends and whoever he met gave him great joy.  He enthusiastically attended his grandchildren’s and great-grandchildren’s activities.  Clarence was generous, kind and loving and brought joy and laughter to the lives of many.

Clarence was preceded in death by his wife Martha; his parents; his sister Esther (Paul) Jasa of Madras, Oregon;  an older sister Irene, who died in infancy; his brother Elmer (Dorothy) Pestal; sisters-in-law and brothers-in-law Ruth (George) Pestal and Betty (Bob) Burkine of Watertown, South Dakota.