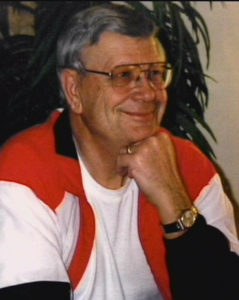 He met his wife of nearly 70 years when working at John Morrell Meat Packing. In 1950 they married, and Darrell joined the Army National Guard serving in the Korean war.

While working for the City of Wichita, he found his passion in life: helping people with addiction problems. He had a wealth of knowledge from personal experiences and was a strong advocate for AA and NA programs. He developed a counseling technique where addicts learned to help and encourage one another to seek and stay in supportive programs. When hired by UPRR in Omaha, he was asked to develop a similar program for their employees. It became the gold standard for railroads across the country and his work won national and international attention.

He had a big smile, loved dogs and telling jokes, was an eloquent speaker and storyteller.