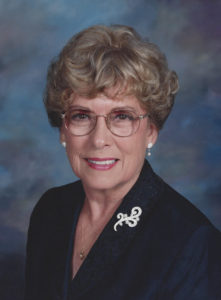 Detta Mae Chapman, 85, of Ashland, NE, entered into rest on Wednesday, July 8, 2020 at Oxbow Living Center in Ashland, NE.  She was born September 2, 1934 in Trenton, NE to Ross and Josephine (Berger) Hawkins.  Detta graduated from high school in Trenton, NE and then taught country school for one year in a one room school house.

On August 1, 1953, Detta was united in marriage to Thomas Chapman at St. James Catholic Church in Trenton, NE.  She worked several retail jobs through the years and she worked at Washington County Bank in Blair for about 10 years.  Detta also taught kindergarten in England while Thomas was stationed there.

She always enjoyed her grandsons and her great-grandchildren.  Detta was a member of St. Mary Catholic Church and the Altar Society.

She was preceded in death by her husband, Thomas Chapman; sister, Delores Porter; and brother, Don Hawkins.