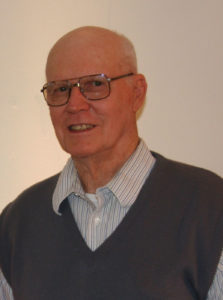 Donald A. Machovec, 93 of Wahoo, NE passed away Tuesday, July 19, 2022 at Bryan West Medical Center in Lincoln, NE.  He was born May 28, 1929 in Wahoo to Anton and Mary (Ruzicka) Machovec.  He attended country school District #62 and St. Wenceslaus School in Wahoo.

Don was a Korean Army Veteran beginning 1954 and was honorably discharged in 1956.   He was united in marriage to Marilyn Wagner on April 4, 1959 at St. John Catholic Church on Creighton Campus in Omaha, NE.  Don was a lifelong farmer in Saunders County.

He was a member of St. Wenceslaus Catholic Church and enjoyed woodworking, gardening, tinkering, and attending tractor shows.  He especially loved going on vacation and taking Sunday drives with his family.

He was preceded in death by his parents, Anton and Mary Machovec; wife, Marilyn Machovec; brother, Anton Machovec and infant sister, Marie Machovec.

Condolences for Donald A. Machovec