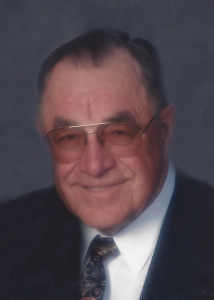 Donald J. Lehr, 89 of Ashland, NE, entered into rest on Monday, November 10, 2014 at Silver Ridge Assisted Living in Gretna, NE. He was born August 26, 1925 in rural Ashland to Ira and Myrtle (Linebaugh) Lehr. After Donald graduated from Ashland High School in 1942, he went on to serve in the U.S. Army until he was honorably discharged in 1946. After serving his country, he attended college at the University of Nebraska. He received his Bachelor degree in 1949 and then his Master degree in 1959. On June 22, 1947, he was united in marriage to Merna Newsham at the First Christian Church in Ashland.

Donald worked as a vocational agriculture instructor for 7 years in Papillion and then two years as an executive secretary of the Nebraska grains improvement association. He also worked in the University of Nebraska extension office as a grain specialist in the marketing department. He spent time working as a grain merchandiser for West Central which later became FARMAR Co. Donald and his family moved to Wood River where he served as the president of Farmers CO-OP for 5 years. Then he became the president and general manager of Neuswangers in Alliance, NE. After his retirement in 1988, Don and Merna moved to Ashland.

Donald was a member of the First Christian Church in Ashland, American Legion Post #129, Masonic Lodge #110 AF & AM, Sesostis Shrine, and the Platte Valley Shrine Club. He loved Nebraska football, playing golf and spending time in the garden. Most of all, he enjoyed the time spent with his family.

He was preceded in death by his parents; brothers, Francis Lehr and Ira Lehr Jr.; and sister, Grace Shubert.

Pastor Lisa Sherman will be officiating the service and Pastor Mike Njus will be the eulogist.