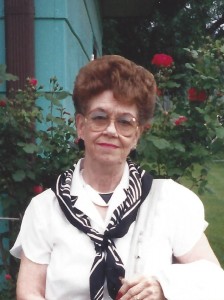 Donna Mae Winters, 88 of Ashland, NE, entered into rest on Saturday, July 12, 2014 at her home in Ashland.  She was born January 13, 1926 in Meadow Grove, NE to Herman and Martha (Brown) Lind.  On November 21, 1970, Donna was united in marriage to Jesse Winters at American Lutheran Church in Ashland.  She worked at House of Bauers Candy Factory and then at Kawasaki until she retired.

Donna was a member of American Lutheran Church.  She loved to play the card game Shapoo and she always loved to people watch.  Dancing and country music always brought her enjoyment.

Pastor Lori Morton will be officiating.