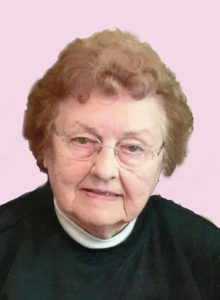 Dorothy M. Urban 88 of Prague, NE passed away Monday, March 27, 2017 at her home.  She was born on November 4, 1928 in Linwood, NE to Frank and Clara (Pospichal) Barcal.   She attended Abie Grade School and graduated from Schuyler High School.  Dorothy was united in marriage to Dennis A. Urban on April 18, 1950 in Abie, NE.

Dorothy worked for Hakel’s Restaurant in Weston, Super 8 Hotel in Wahoo and was a member of American Legion Auxiliary Post #254 in Prague. She enjoyed sewing, embroidering, playing cards, watching TV, spending time with her family and spoiling her grand and great-grandchildren.