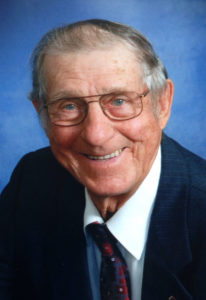 Edwin H. Kudlacek, 93, of Valparaiso, NE, entered into eternal rest on Thursday, September 16, 2021 at Brookside Rehabilitation Center in Lincoln, NE.  He was born December 7, 1927 in Brainard, NE to Edward and Stella (Ratkovec) Kudlacek.  Edwin graduated from Brainard High School in 1945.  He served his country in the U.S. Air Force until he was honorably discharged in 1949.  On December 29, 1950, he was united in marriage to Darlene Soukup at Holy Trinity Catholic Church in Brainard, NE.  Edwin was a lifelong farmer in the Valparaiso area.