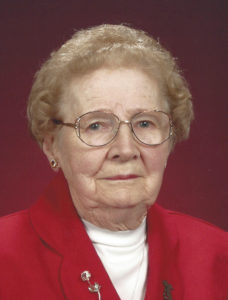 Frances Penke, 98, of Omaha, NE, formerly of Ashland, died Tuesday, October 18, 2016 at Heritage Pointe in Omaha.  She was born July 30, 1918 in Bonesteel, SD to Frank and Amanda (Frank) Vetter.  As a teen Frances moved to Omaha where she met Rudolph Penke.  They were united in marriage on November 30, 1947 at the Lutheran Church in Bonesteel, SD.  They lived in Bennington, NE on the Penke farm for 4 years.  In 1951, Rudy and Frances moved to a farm near Memphis and they retired to Ashland in 1990.

Frances was a farm wife that enjoyed caring for her rose garden and her family.  She loved gardening, canning, and especially loved her grandchildren and great grand kids.  Frances was a member of Word of Hope Lutheran Church.

She was preceded in death by her husband Rudolph Penke, 4 sisters, and son-in-law Phillip Bates.