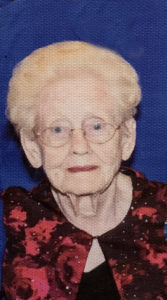 Genevieve Oleen Wright, 95 of Greenwood, NE entered into enteral rest on Monday, January 13, 2020 at her home.  She was born March 5, 1924 in Greenwood, NE to Leonard and Lillian (Anderson) Jardine.

Genevieve grew up in Greenwood, attended Greenwood Public School and graduated from Greenwood High School in 1942.  She was united in marriage to Aaron Edward Wright on May 15, 1942 in Greenwood.  From this union three children were born, Aaron Eugene “Gene”, Gregory Leonard and Jan Marie.

Genevieve was a homemaker.  She loved her family and she loved to help others.  She was a longtime member of the Greenwood Christian Church, where she taught Sunday School, Vacation Bible School and was on the board.

She was preceded in death by her parents; husband, Aaron; sons, Gene and Greg; daughters-in-law, Patricia and Carolyn; son-in-law, Kevin DeGarmo; brother and sister-in-law, Billy and Opal Jardine; sister and brother-in-law, Iness and Hermon Abbott.