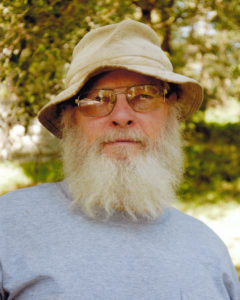 George Gunnar Nygren, age 77, of Ashland, passed away peacefully on Saturday, May 28th at his home. George was born January 29, 1945, in Denver, Colorado to Carl and Christine (Ferguson) Nygren. George grew up in the Mead and Ashland area and graduated from Mead High School in 1963. In 1974 he married Judy Ann Miller, daughter of Lloyd and Marie Miller at Zion Lutheran Church of Ithaca.

George was an avid collector whose passion ranged from plows to rocks to wooden boxes. In addition, he was a talented fabricator and artist who could craft most anything from metal or wood. This led him to a long career selling toy tractors at farm toy shows and making toy parts that were shipped across the country. In addition, George farmed for many years around Ashland and Ithaca. An avid tree planter, the thousands of trees that he planted on the family farm will stand as a testament to his passion for years to come. George also served in the National Guard from 1965 to 1971.

George was very proud of his kids and grandkids and loved to spend time telling them stories of years gone by.

George was preceded in death by his parents Carl and Christine Nygren and his brother Bill Nygren. He is survived by his wife of 48 years, Judy; his children J.Marie (Matt) Hansen, George (Megan) Nygren, and Aaron (Kathryn) Nygren; his grandchildren Grace, Hope, Anne, Henry, Evie and Eli; and brother John.