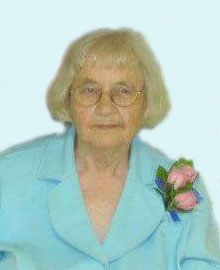 Gertrude C. Williams, 94 of Ashland, NE, died Thursday, December 8, 2016 at the Ashland Care Center.  She was born on September 8, 1922 in Sutton, NE, the oldest of ten children, to Henry Sr. and Wilhelmina (Ehly) Fehr.  She was baptized and confirmed in the Emmanuel Reformed Church in Sutton.  Gertrude married Ray E. Williams on May 1, 1952 and to this union six children were born: Steven, Glen, Janet, Rogene, Keith, and Marlene.  They moved to Ashland in 1963.

Gertrude was a member of Word of Hope Lutheran Church, VFW Post #9776 Auxiliary, and the American Legion #129 Auxiliary.

Gertrude spent many years gardening, canning, and baking many of the fruits of her labor into pies.  She will be forever remembered for her strong faith and determination, her home-made German cooking and her love of family.

Gertrude loved ice cream and chocolate.  Even in her final days, these brought her comfort.  We always gave her a piece of chocolate before saying goodbye.