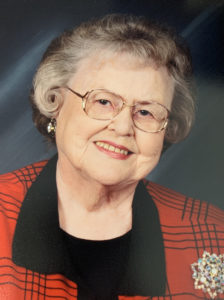 Gladyce M. Nielson, 88 of Wahoo, NE entered into eternal rest Sunday, October 24, 2021 at South Haven Living Center in Wahoo.  She was born April 28, 1933 in Valparaiso, NE to Emil and Anna (Rehovsky) Kubik.  She graduated from Valparaiso High School in 1950.  She was united in marriage to Guy E. Nielson on June 27, 1950.  She worked as a bank teller, bookkeeper, and school cook.

Gladyce was very artistic and enjoyed crafting, and flower arranging where she won numerous ribbons at the Saunders County Fair.  She was also a great mother, grandmother and cook.  Some of her specialties were runzas, kolaches, and fried chicken.  One of her highlights later in life was being known as “Grandma G” in the Foster Grandparent Program in Lincoln.