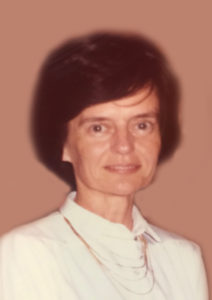 Ina Ilene Grebe left this world holding hands with her husband of 68 years Ronald D. Grebe on Friday, August 30, 2019 in Lincoln, NE.  She was born on the family farm outside of Ashland, NE on December 8, 1929 to Ray E and Viola Mabel (Stickney) Bower.  She was preceded in death by her son, Russell Ray Grebe, her parents and siblings Everett (Marjory) Bower, Mary Lou (Dwight) Jameson and Ethel (Keith) Pollard. She also survived 4 nephews.  In addition to her husband Ron, she is survived by her brother Rex and sister-in-law Pat Bower, as well as 10 nieces and nephews, 32 great-nieces and nephews and 7 great-great nieces and nephews.

Ina was a devoted wife, mother, sister and aunt to her family. Her faith in God was important to her and she was involved in the Ashland Methodist Church and later in Lincoln in Christian Women’s Club and their Bible studies, 1st Covenant Church for almost 50 years and then St. Mark’s Methodist Church.

Graduating from Ashland High School in 1947, Ina began working for Lincoln Telephone, then Watson Transportation before meeting her future husband on a blind, triple date.  She had just met Ron when she was selected as Queen of the Ashland Stirrup in 1950.  She and Ron were married at Ashland United Methodist Church on June 23, 1951 and resided in Lincoln.  After their son Russ was born, she left the business world to fully devote her time to family.  His death due to leukemia in 1977 was the most trying time in her life, but also drew she and Ron even closer together.

A fastidious housekeeper and cook, she preferred chocolate and dessert!  She was a great gameplayer at all the family gatherings and was playing cards and marbles up to her last few days!  Whenever anyone in the extended family needed help, Ina was there whether it was nursing surgical patients to recovery or taking care of the kids, she stepped up to keep families running smoothly.   Later in life she would become a surrogate mother/grandmother to several other families.

Though she always lived within 30 miles of her birthplace, Ina loved to travel with Ron, going as far away as Japan and Europe as well as within the US and Hawaii, including several Super Bowls.  She and Ron were avid Cornhusker fans for football, baseball and basketball.

Condolences for Ina I. Grebe