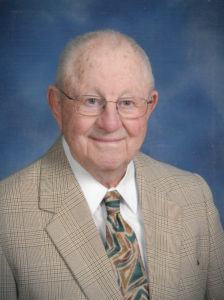 James “Jim” E. Bauer, 95 of Wahoo, NE entered into eternal rest Thursday, September 23, 2021 at South Haven Living Center in Wahoo.  He was born December 1, 1925 in Morse Bluff, NE to James and Anna (Janecek) Bauer.  He graduated from North Bend High School in 1941.  Jim was a WWII Army Air Corps Veteran and was honorably discharged in 1946. He was a very proud veteran and always a proud American.

He was united in marriage to Lorraine Petrzelka at St. John the Baptist Catholic Church on June 28, 1949.   He was a faithful member of St. John the Baptist Catholic Church, Knights of Columbus Council #1833, American Legion #254 and a 4-H leader for many years. Jim was a lifelong farmer until he and Lorraine decided to open Bauer’s Cafe on highway 92. Diners will remember their famous homemade dressings, chicken noodle soup, pies and cinnamon rolls.

He enjoyed traveling, Lorraine’s food, fishing, Nebraska sports, baseball, and farming; especially his cattle and corn. He loved his Czech heritage and spoke the language all his life. He spent his retirement years in Prague, Nebraska, where he loved the community, his breakfast club at Kolache Korner Cafe, and tending to his garden on Lusatia Avenue.