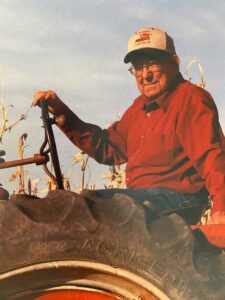 James “Jamie” O. Dill, 84, of Ashland, NE passed away Friday, November 4, 2022, at Oxbow Living Center in Ashland, NE. He was born May 11, 1938, to Bernard and Marie (Christensen) Dill of South Bend, NE.  He graduated from Ashland High School in 1955.  He served in country in the U.S. Army from 1961 to 1963. Jamie was united in marriage to Janice Higgins on June 12, 1965, in Leavenworth, KS. Jamie worked for Foxley Cattle Company and was a member of the Mid-States Antique Tractor and Engine Club.

Jamie loved to fish. Whether it was Wahoo creek next to County Road A or out to Monroe in the reservoir with friends, he was always ready to hang a big fish head on the trophy tree. The girls in the family, not so much maybe. And beer, you can’t fish without drinking beer.

Jamie was a decades long member of the Mid States Antique Tractor Club and looked forward to and enjoyed the Midwest Show each year. He’d spend nearly every day in his shop tinkering on one old tractor or another, when he wasn’t visiting with anyone who would stop by. And beer, you can’t tinker on a tractor without Nebraska temperature beer.

Jamie loved to tell stories. Some of those stories just might have had a bit added to them over the years, and for sure they had some colorful words added to the story to spice things up a bit. But one thing for sure, on your worst day, he could have you laughing in no time at all. And beer, you can’t tell a good story without having an Old Milwaukee.

Jamie had a work ethic like few others. While he worked off the farm, he devoted himself to maintaining and improving the family farm, ensuring its continuation into the next generation – because that was family to him. There’s no doubt he loved his family and was married to Janice for 57 years. While he could be a man of few words, he worked hard and was glad to tell friends how proud he was of his children and grandchildren’s accomplishments.

Jamie was preceded in death by his parents, Bernard and Marie Dill, and his brother-in-law, Jim Ruhge.