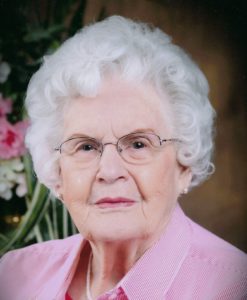 Elinor Jeanne Lambert, 100, of Ashland NE, entered into eternal rest on Thursday, July 7, 2022 at Oxbow Living Center in Ashland NE.  She was born October 27, 1921 to William O. and Lucy E. (Petty) Post.  Jeanne graduated from Springfield High School in 1940.  She married Robert (Bob) E. Leesley and they lived near Greenwood NE.  They had three children: Sharon, Roberta (Bobbie) and Robert Jr. (Bud).  Bob passed away in 1971 and Jeanne eventually moved to Waverly.  During her lifetime, Jeanne worked at Lincoln Liberty Life, Purina Feed Store, and Lancaster County Bank, always making lifelong friends wherever she went.  In 1975, she married Willis Lambert and they lived in Waverly until his death in 1986.

Jeanne continued to live in Waverly until she made the decision to move to Legacy Terrace in November 2005.  She enjoyed the company of good friends who also lived there and they spent much time eating together, playing cards and laughing.

In January 2017, Jeanne moved to Oxbow Living Center to be closer to her family in the Ashland area.  She lived at Oxbow with wonderful care from the loving staff at Oxbow until her last breath.

Jeanne’s greatest delight was being with her family.  She tirelessly cared for their needs and always made them her priority.  Jeanne had a wonderful way of making everyone feel special and important, because she truly appreciated the gift of her friends and family around her. Jeanne loved watching the Huskers, reading, playing cards and doing the daily puzzles from the newspaper.  Jeanne chose to focus on the many blessings in her life, despite the many hardships she also endured.  Her faith and her family, as well as a lot of “spunk”, sustained her through her 100 years of life.