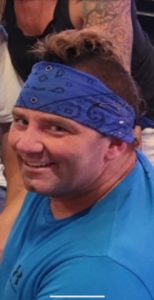 Joseph A. Nissen, Jr., 42 of Maurice, LA formerly of Memphis, NE passed away Friday, September 17, 2021.  He was born December 26, 1978 in Lincoln, NE to Joseph and Scarlet (Boot) Nissen, Sr.   Joe was 42 years young.  Joe graduated from Ashland-Greenwood High School in 1997.  While in high school, he joined the Army Reserves.  He served in Iraqi Freedom for 18 months before being honorably discharged in 2004.  Joe worked as a heavy diesel mechanic while in the Army.  After the Army he worked as an Iberia Parish Deputy and worked on the production platform for Exxon Mobil.

His hobbies include rodeos, bull fighting, riding bulls, motorcycles, chasing hurricanes and being a Superhero at night.

Condolences for Joseph A. Nissen, Jr.