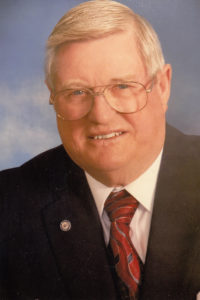 *The Funeral and Rosary will be live streamed on Sts. Mary & Joseph Church – Valparaiso Facebook page.

Kenneth W. Seemann, 82 of Valparaiso, NE entered into eternal rest Saturday, April 10, 2021 at his home.  He was born June 22, 1938 in Spencer, IA to Lee and Irene Seemann.  He received his schooling from Webb Consolidated School in Webb, IA.   He served his country in the U.S. National Guard from 1955 to 1964.  Ken married Rosalie Hladik on May 20, 1961 at St. Joseph Catholic Church in Agnew, NE.  Ken retired from Gamble-Robinson after 25 years as a salesman/assistant manager.

Ken was a member of Sts. Mary & Joseph Catholic Church, Knights of Columbus Council #8625 and American Legion #371. His faith and his family were the center of his life.   He loved spending time with his family and enjoyed old cars and tractors, raising cows and working with horses and he could fix most anything that was broken.

Ken is survived by his wife of 59 years, Rosalie Seemann; children, Cindy (John) Peterson of Ceresco, Dan (Carmen) Seemann of Copperas Cove, TX, Sherree (Robert) Rezac of Valparaiso, Tami (Kurt) Pytlik of Ceresco; 14 grandchildren; 8 great-grandchildren and one on the way.

He was preceded in death by his parents, Lee and Irene Seemann; grandson, Wyatt Pytlik; sister and brother-in-law, Marjorie and Duane VanVickle; father and mother-in-law Charles and Emma Hladik.

A special thank you to the hospice staff, Sally and Dorothy, for the great care they provided Ken.