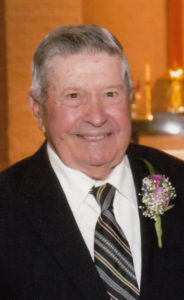 *The Funeral will be live streamed on Sts. Mary and Joseph’s Church – Valparaiso Facebook page.

*The Rosary will be live streamed on Svoboda Funeral Home Facebook page.

Marian Sisters of the Diocese of Lincoln or
in care of the family for future designations.

Lawrence Louis Rezac, 92 of Valparaiso, NE passed away Monday, February 22, 2021 at St. Elizabeth Medical Center in Lincoln, NE. He was born September 9, 1928 in Touhy, NE to John and Lydia (Malousek) Rezac.  He spent time in the U.S. Army during the Korean Conflict for two years.  He was honorably discharged in 1953.  He was a member of the American Legion Post #371 and VFW Post #10491.

Lawrence spent his life doing what he enjoyed – farming, spending time with family, listening to Polka music and reading.  His faith was important to him and he had deep devotion to the rosary.  His wife, Beatrice and his family were the love and joy of his life.

He is survived by his wife, Beatrice; 10 children; 16 grandchildren; 7 great-grandchildren and one on the way.