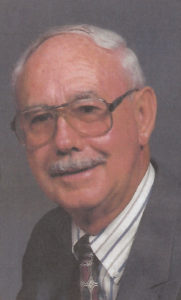 At a later date.

Leland D. Hiatt, 97 of Lincoln, NE and formerly of Ashland, NE passed away Saturday, December 19, 2020 at the Monarch in Lincoln.

I was born in Rising City, NE on January 21, 1923, the second of six siblings born in the family of Welford M. and Angie M. (Blank) Hiatt. I attended school in Rising City, NE, graduating in 1940 and attended Teachers College in Kearney, NE earning an Elementary Teaching Certificate which I used for two years at Seward County School District # 43, known as the Ritchie School.

In June of 1943 I was drafted in the U.S. Army where I served nearly three years active duty in various stateside assignments, ending up in Namur, Belgium (127th Finance Disbursing Section) and in Hofheim, Germany (3rd Military Government Regiment). When I was discharged from my WWII service, I remained 16 additional years in the Army Reserves.

I married my high school sweetheart, Kathryn VanMatre on Jun 2, 1946.  We had four children who have made us very proud; Terry, Ivalee, Deni and Amy.

I attended Nebraska Wesleyan University for a short time, then completed the accounting courses offered by the National Business Institute and the General Motors Business School.  I was an accountant for Laune Chevrolet in Ashland, NE for six years and DuTeau Chevrolet in Lincoln, NE for 25 years. I retired in 1985.

I had the honor of helping during the 1990 national census as an enumerator in Cass and Lancaster counties.  I was a desk clerk at Mahoney State park during the summer months while living in Ashland.  I was a school board member, member of the Ashland-Greenwood School Foundation for 25 years, Executive Secretary of the School Board for 16 years, member of the Library Board and secretary of the Chamber of Commerce. I’ve been an active member of the United Methodist Church for over 80 years filling many positions.  Music was my passion for many years.