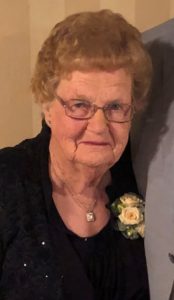 Lucille V. Beranek, 85 of Ashland, NE passed away Tuesday, January 26, 2021 at Lakeside Hospital in Omaha.  She was born February 25, 1935 in Davey, NE to Benjamin and Hilda (Erickson) Dahl.  She graduated from Ceresco High School in 1953.  She was united in marriage to Dennis Beranek on July 30, 1955 at Nazareth Lutheran Church in Davey.

Lucille was a proud, hardworking and loyal farm wife all of her life.  She was always willing to lend a hand in the field or in the shop and after a hard day’s work, she always made sure there was a meal on the table for her family.    In her earlier years she worked at a bank in Lincoln, at the post office in Davey and as a janitor at Memphis school.

Lucille was a member of Word of Hope Lutheran Church in Ashland.  She was a faithful and loving wife, mother, grandmother and great-grandmother.  She enjoyed dancing, word searches and attending her family’s activities.  Lucille and Dennis have enjoyed traveling in the United States and overseas along with many cruises.