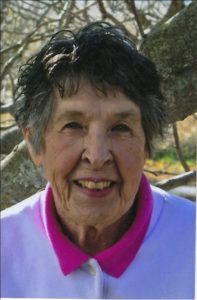 Margaret Jane (Bachman) Mason of rural Ashland walked the stairs to Heaven on Sunday, April 18, 2021 at the age of 98 at the Oxbow Living Center in Ashland.  She was born on November 12, 1922 to Aaron D. Bachman and Mabel F. (Jones) Bachman on the family farm.

Margaret graduated at the age of 16 from Ashland High School in May of 1938.  Her desire at that time was to become a Woman Aviatries (women pilot) which never came to pass.

Margaret married William “Bill” F. Mason on August 31, 1941 in Quartzite, AZ.  She was a loving wife, devoted mother of six and loving sister and friend to many.

Margaret loved her children greatly and was always active in their lives as they grew up.  She was a Girl Scout Leader and involved in Cub Scouts and 4-H.  She was a lifetime member of the Ashland Saddle Club, American Legion #129 Auxiliary and Ashland Golf Club.

Margaret had a great love of golf and could be found on the golf course well into her 90’s.  She was still watching golf until the end of her life.  She watched the entire 2021 Masters Tournament when Hideki Matsuyama won at 10 under par.

She was preceded in death by husband, William “Bill” Mason; parents; sister; brothers; and son-in-law.