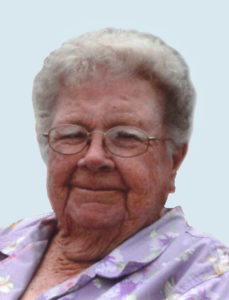 Marie Kucera, 90, of Valparaiso, NE, entered into eternal rest on Sunday, April 30, 2017 at South Haven Living Center in Wahoo, NE.  She was born June 7, 1926 in Schuyler, NE to Frank and Agnes (Votava) Ratkovec.  On November 20, 1945, Marie was united in marriage to Edwin J. Kucera at St. Vitus Catholic Church in Touhy, NE.  Marie was a waitress at the Wigwam in Wahoo in her early years and then Hakel’s in Weston.  She farmed with her husband for most of her life until they moved to Valparaiso and most recently Marie worked as a waitress at Harry’s.

Marie was a member of St. Vitus Catholic Church, St. Vitus Altar Society, and a past member of the St. Vitus Choir.  She was a generous person with strong faith that loved the outdoors, the farm and her family.  She had many hobbies which included: crocheting, quilting, baking, cooking, gardening, sewing, playing cards, bird watching, and in her earlier years dancing and fishing.