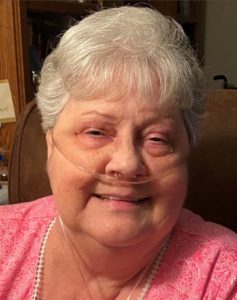 Mary was born in Battle Creek, Michigan on March 28,1952, the second of six siblings born to Loren and Alice (Slone) Coffman.

After moving to a few different states along the way, the family ended up in Ashland, NE where Mary started attending high school.

Through the years Mary worked as a cook, café prep line worker, an assembly line worker at a couple of different factories then ended at Mahoney State Park working as a ground’s keeper and at the marina when she retired due to health issues in 2005.

From her first marriage Mary had two sons. Jamie Davis and Danny Davis.

On July 10, 1993, Mary married Elmer “Lee” Stokes. They had a beautiful country wedding on horseback in Oklahoma.

Mary enjoyed working in her large flower gardens, attending her “girls” family cookie bakes, riding along on work trips with Lee in his semitruck, the many camping trips with her grandkids and coloring apps on her phone.

Mary was preceded in death by her parents, her boys’ father, her husband Lee, brother Richard, sister Brenda and shared day of death, brother Clifford.

Condolences for Mary A. Stokes