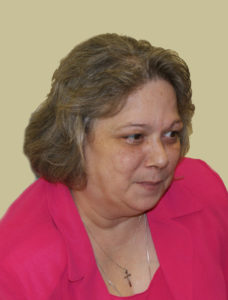 No services are scheduled.

It is with regret we must share Karen has passed.  She was surrounded by family and friends as she walked her path with our lord.  Born May 21, 1954 in Kansas City, Missouri to Francis and Lula Fay Kearney.  She grew up in Kansas and delivered real state documents for her mother, amongst other service jobs until marrying.  May 1, 1973 she married William E. Striplin, and had a daughter Katherine.  While the marriage did not last she fell in love with Jerome “Jerry” D. Dover, marrying February 08, 1980, and having a son David.  She spent most of her life as a stay-at-home mother raising her two children, and occasionally working service jobs to meet ends.

While her first two marriages did not last, she did find love and happiness with James “Jim” Victor.  They never married but provided each other support and comfort for the last three years of her life.  She is preceded in death by her mother, father and brother-in-law David.  She is survived by daughter, son-in-law Andrew (grandchildren, and great grandchildren), son, soon to be daughter-in-law Laura (granddaughter), Sister Roxanne, Uncle Harold, and many cousins.

Karen had a beautiful spirit, and could bring a room alive with laughter and stories.  May she rest in peace.