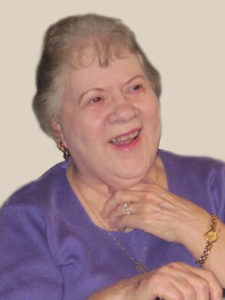 Merna (Newsham) Lehr was born in Ashland, NE on July 8, 1927 and passed away on August 22, 2018 at the age of 91.  Born to Noble and Gladys Newsham, Merna attended the public schools in Ashland and two years at the University of Nebraska.  She married Don Lehr after he returned from WWII service.  She taught elementary school for a year before she and Don moved to Papillion, NE and started raising their surviving five children: Sherry Swanson (Gary), Steve Lehr (Donna), Stu Lehr (Jim Elliott), Sheila Kuhn and Scott Lehr (Dawn).  When her oldest, child, headed to college and her youngest, started kindergarten, Merna began her job as school secretary.  She worked at that job until Don got a job in Wood River and later Alliance, NE.  During those years Merna was active in the Methodist Church where she often played the piano.  She continued playing piano for the Christian Church when she and Don retired to their childhood home, Ashland, NE.  Her sister, Ruth Parks, also lives in Ashland.  Merna enjoyed knitting and baking cookies for her grandkids and 10 great-grandkids.  Merna survived her husband Don, who passed away in 2014, and is rejoined with him in heaven.

Condolences for Merna B. Lehr