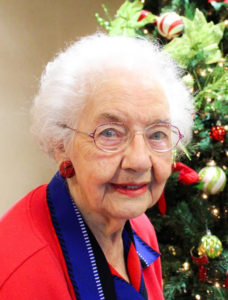 Merna Mardell (Smith) Hagstrom, 94 of Ashland passed away Wednesday, May 26, 2021 at Oxbow Living Center.  She was born January 20, 1927 to Claude C. and Erma T. (Sherman) Smith in Memphis, NE. Merna grew up in the Memphis and Ashland areas.  As a child she tapped danced and played the accordion.  She took part in many programs and talent contests.  Merna graduated from Ashland High School.

She married Kenneth O. Hagstrom on April 1, 1944 in San Diego, CA shortly before Kenneth’s Marine division shipped out to the South Pacific during the war.  They lived in the Ashland area all their lives.  Merna was a Sunday School teacher, Brownie Scout and 4-H leader, member of the Ashland Saddle Club, life-member of the American Legion Auxiliary #129, Ashland United Methodist Church, and many bridge clubs.

She worked as a Nutrition Aide for UNL in Saunders County for over 10 years and served as Secretary to the Ashland Housing Board before becoming manager of the Golden Manor Apartments for 32 years which she really enjoyed.  She loved going to all of her grandchildren and great-grandchildren’s sporting and dance events and especially enjoyed playing bridge with her friends.