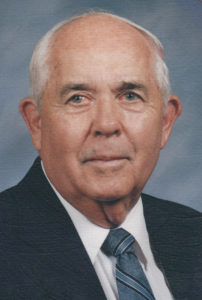 Raymond L. Johnson, 88, of Ashland, NE, passed away on Friday, March 10, 2017 in Ashland, NE.  He was born June 22, 1928 in Tecumseh, NE.  The oldest son of Leonard and Leila (DeWeese) Johnson graduated from Tecumseh High School in 1946.  During his school years he was active in football, basketball, and musical performances.

Ray joined Lincoln Telephone and Telegraph Company prior to his senior year in high school.  He worked for LT&T in the morning and participated in school sports in the afternoon.

In 1946, he met the love of his life and on June 19, 1948 he married Beverly Waymire at the Methodist Church in Sterling, NE.  They became the parents of two daughters and two sons.

In 1953, Ray became the youngest exchange manager for LT&T in Cook, NE and his lifetime career began.  Ray went on to manage offices in Friend and Ashland.  In 1972, Ray was assigned an area manager position in Wahoo where he retired in 1990 with 45 years of employment.

Ray was an active member of any community in which he lived.  He was a member of the Rotary, Lions Club, Worshipful Master of Masons, Eastern Star Patron, and a longtime coach of boys baseball.  His hobbies included a love of sports and outdoors, where he hunted, fished, bowled, and golfed.  Ray was known throughout southeastern Nebraska as an outstanding fast-pitch softball pitcher.  Ray and his wife Beverly spent endless hours attending sporting events of their grandchildren and children in their communities of Wahoo and Ashland.  Raymond was a devoted member of the United Methodist Church through their married life of 68 years together.

His family remained his strongest love as he enjoyed spending time with his children, grandchildren, and great-grandchildren.  Creating memories with his hands and wood became his passion, as he made countless pieces of woodworking art.