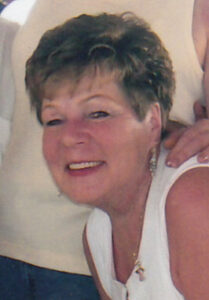 Rita Kathleen Dockweiler was born on April 11, 1945, in Sioux City, IA. Rita grew up in Scribner, NE, where she was adopted by and lived with Gilbert and Edna Hoffman and their family. She attended the Scribner Community Schools, graduating from Scribner High School in 1963. Rita was married to Larry Kuester, and to that union was born two sons, Ricky and Troy.

On September 19, 1987, Rita was united in marriage to the love of her life, Thomas Dockweiler, in Las Vegas, NV. With that union Rita gained three beautiful daughters, Laurie, Shelley, and Christie.

Rita enjoyed bowling, fishing, camping, cooking, playing the lottery, spending time at the casinos, and visiting with family and her endless number of friends. Rita enjoyed working at the Wahoo Hinky Dinky and Sun Mart grocery stores, taking pride in her produce section, and decorating cakes at the Wahoo Dairy Queen.

Rita was preceded in death by her parents; husband Tom; son, Rick Kuester; two brothers; and her beloved four-legged companions Misty and Candi. On October 25, 2022, Rita went to the Rainbow Bridge to be united with her companions, and together they went on to be reunited with the love of her life, Tom.