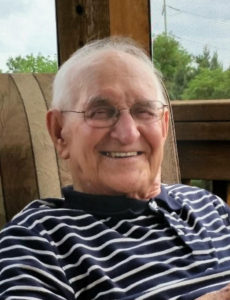 Bob was born to his parents Anton and Henrietta (Staska) Cerv on May 5, 1925 in Weston, Nebraska, a small town west of Wahoo, NE.  He served his country in the U.S. Navy during WWII until he was honorably discharged.  On June 5, 1948, Bob was united in marriage to Phyllis Pelton at St. John Nepomucene Church in Weston, NE.

Bob was an eight time letter winner at the University of Nebraska in both basketball and baseball and he was an All-American in baseball.  He signed with the New York Yankees in 1950.  He played with the Yankees until 1956, and then was traded to the Kansas City Athletics in 1957.  In 1958, Bob hit 38 home runs and was elected to the A.L. All-Star Team.

He won the NBC Tournament one summer in Wichita, Kansas while managing the Liberal B.J.’s a semi-professional baseball team.  One player stated that Bob was a great coach while sitting on a five gallon pail.  Bob swung a bat that was very similar to a six foot post-unbelievably heavy.

Bob was really a quite modest man about his baseball background and he always said his greatest accomplishment in life was his ten children.