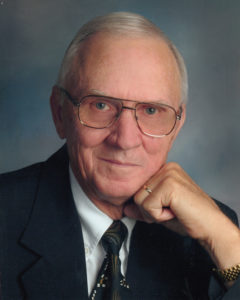 Ronald Duane Grebe was looking forward to the day when he would be reunited with his wife and son and enjoy eternity together with his loving God.  He made that passage on Thursday, January 23, 2020.

Ron was born March 28, 1931 in Pierce, Nebraska to Gerald and Katherine (Strasheim) Grebe.  He was preceded in death by his wife of 68 years, Ina Ilene Grebe, and their son, Russell Ray Grebe, his parents and siblings Wallen (Evelyn) Strasheim, John Grebe, and Melinda (Richard) Coupe as well as a niece and four nephews.  He is survived by his sister, Katherine (Dean) Flickinger, Ina’s brother Rex (Pat) Bower, 20 nieces and nephews collectively as well as many great and great, great nieces and nephews.  He especially enjoyed seeing the next generations coming into the family.

Ron always said Ina was the love of his life and he married her in the Ashland United Methodist Church on June 23, 1951.   He met her on a blind triple date where she was set up with another guy.  As he says, four days later he asked her on a date and the rest is history. They were thrilled with the birth of their only son Russ in 1953.  His death due to leukemia in 1977 at such a young age was the most trying time in their life, but also drew them closer together.   Ron and Ina maintained close relationships with their nieces and nephews and were surrogate parents/grandparents to friends and family alike.  Ron loved his time with the nephews on hunting and fishing trips.  He was also an avid marble and card player and loved family game nights.

Ron was a people person – he thrived on building relationships in business and social settings, and most especially with family. Ron loved to mentor others.  He was a member of 1st Covenant Church for over 50 years and spent many years as a member of the choir.  He helped start a Bible study group over 30 years ago that continues today with members from several different churches.  He was a part of Fellowship of Christian Athletes since 1978 and the Team Mates program since 1992.  When he and Ina moved to Gracepoint two years ago, he started a Bible study there as well.  Ron also spent years volunteering with Gateway Sertoma Club, serving a term as their president as well as guiding their fundraising efforts, and sat on the Boards of the People’s City Mission and several banks.

Ron’s family moved to Lincoln in 1936 and he grew up working in his father’s service station.  He and a friend then partnered to buy a Ford dealership in Ashland which they sold to Lee Sapp several years later in 1978.  Ron stayed on and served as the general manager for another 38 years, winning many sales awards.

Ron and Ina loved to travel, going as far away as Japan and Europe, as well as all over the continental US, Alaska and Hawaii, including several Super Bowls.  Ron was an avid Cornhusker fan especially for football, baseball and basketball.