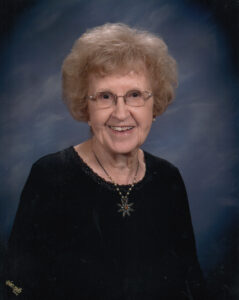 Ruth Eileen Beranek, 98, of Wahoo, NE, was born in Wahoo, Nebraska to Henry & Mary Hrdlicka on August 13, 1924, she died peacefully on January 6, 2023 in Texas.  She first attended country school and then graduated from Wahoo High School. Ruth attended Luther College for 2 years then was a chauffeur at the Mead Ordinance plant during World War II. She bought her farm near Weston and worked at the Wahoo Bakery where she met her husband Joe Beranek at the OK Meat Market. They were married for 58 years.

Ruth was a devout Catholic, loved her family and was always on the go. She played the trombone and accordion. Enjoyed sewing, crocheting, quilting, puzzles, bowling, golf, Bingo, horse races, casino slots and coffee with friends.  She belonged to many groups, Rosary Society, Altar Society, PCCW, she was a Brownie leader, 4-H Leader, PTA president, chaired the first St. Wenceslaus Fall Festival. Her favorite line was “What should we do next?”

She was preceded in death by her parents, husband Joe, sisters, Mary, Zita, Ethel and brothers Joe, Bernie & Henry.