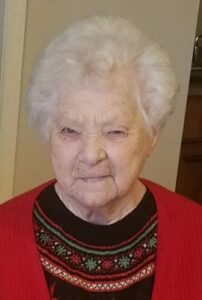 Ruth graduated from Strahan High School in Iowa along with her two sisters, Amy and Esther Holliday.  All three of the Holliday girls were on the same girls basketball team and graduated in the same year.  On November 5, 1941, Ruth was married to Clyde E. Jones at the courthouse in Wahoo, NE.

Ruth lived on the family farm outside of Ashland until they moved into Ashland in 1955.  They moved to Clermont, FL in 1978, then to Mt. Vernon, MO in 1990 and back to Ashland in 2009.  Ruth worked for the Ashland Telephone Company and for Knickersons Farms.

Ruth enjoyed fishing, collecting dolls, sewing, working in the garden and she enjoyed being with her family and friends.  She had a green thumb when it came to her beautiful flowers and plants.  She often arranged flowers for the church out of her garden.  Ruth’s faith was very important to her and she read the Bible, that her father gave her, every day.

She is survived by several nieces and nephews and many friends that she made from the places she lived and her doll collection friends.

She was preceded in death by her husband, Clyde Jones (2009), parents, three brothers (George, Bernard and Dennis) and two sisters (Amy and Esther).