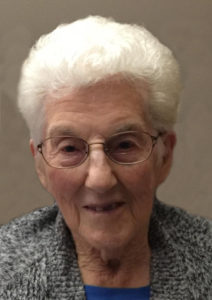 *The service will be live streamed on the Marcy Mortuary Facebook page.

Ruth Virginia Reim was born November 13, 1928 in Dorchester, NE to Jay and Esther (Scott) Younkin.  Ruth attended a rural school and graduated from Dorchester High School.  She went to UNL and got a teaching certificate and taught in a country school for three years.  Then she went to Lincoln and worked at Elgin Watch Factory.  There she met her husband, Herman “Fred” Reim, thru mutual friends.  They married on March 12, 1950 in Dorchester, NE.  To this union four children were born:  Diane, Linda, Joyce and Randy.

Ruth considered herself like a hired hand on the farm as she helped her husband do most everything from scooping silage to planting crops, driving the combine and driving the truck to unload in the grain bins.  She loved to sew and made many quilts for her children, grandchildren and friends.

Over the years her hobbies included ceramics, macrame, crocheting afghans, needlepoint, crafts and of course quilting.

Ruth passed away March 5, 2021 at the Ashland Care Center at the age of 92 after getting the COVID-19 virus and the return of lymphoma.