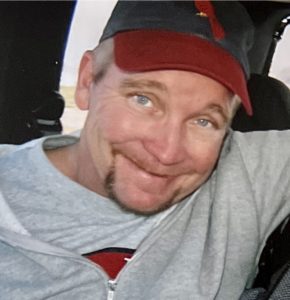 Steven Frederick Thimgan, 58, of Yucaipa, CA, died December 21st, 2021 at his home. Steve was born January 27th, 1963 to John and Kay Thimgan in San Bernardino, CA. Steve was preceded in death by his mother and grandparents. Steve is survived by his father, John of Grand Island, brother Scott of Grand Island, sister Sheila of Lincoln, nieces Cassie and Jenna and nephew Jake. He is also survived by wife Tamera of Yucaipa, CA and stepchildren Amanda, Megan, and Lindsay.

Steve married at age 51 to Tamera Thimgan (Harris). He grew up in Calimesa, CA and graduated from Yucaipa High School in 1981. Steve also resided in Nebraska for several years.

Steve was an active member of New Life Christian Fellowship in Calimesa. Steve worked as an ironworker in his early years and helped construct many of the bridges in San Bernardino County, CA. He was previously employed by Stater Bros. Market, Vons, and Sam’s Club. He was a custodian for many local elementary schools for his remaining employment years. He enjoyed playing baseball in local leagues, bowling, collecting baseball cards and antiques.

Steve was also well known for his knack for helping people with yard work and tasks around their homes. He started detailing cars and gained many friends and clients throughout the years. His attention to detail will be sorely missed.

If you knew Steve, you knew he loved his family, he would do anything for anyone, he never met a stranger, he loved to joke around, and he loved baseball. Steve will be deeply missed and well-remembered for his witty personality, vast knowledge of baseball cards and sports stats, his famous chili and barbeque dinners, and the fun times he shared with family and friends. He was loved by many and will remain treasured in our hearts and memories.