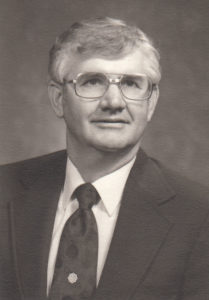 Thomas Edward Chapman entered into eternal rest on February 5, 2020 in Ashland, Nebraska at the age of 88.  Tom was born on November 21, 1931 in Trenton, NE, the son of Harvey and Florence (Blue) Chapman.

Tom graduated from Trenton High School in Trenton, NE in 1950, where he lettered in his beloved sport of football. After high school, he enlisted in the U.S. Air Force.

Throughout his Air Force career, Tom was assigned to many bases as he advanced through the enlisted ranks in Strategic Air Command and the Air Force Institute of Technology, serving in England and many military bases in the United States.  Tom proudly served his country for 20 years and when he retired in 1972, had attained the rank of Master Sergeant.

Family was important to Tom and in 1993, he and Detta retired to Ashland, Nebraska giving them a life close to their son’s families and grandsons.

Tom was a member of St. Mary Catholic Church in Ashland and a member of the Honor Guard in the American Legion Post #129.  He enjoyed woodworking, fishing, camping, boating, grandsons and great grandchildren.