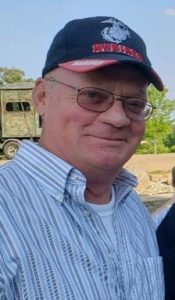 Tim H. Decker, 67 of Ashland, NE entered into eternal rest Tuesday, December 14, 2021 at his home surrounded by his loving family.  He was born November 10, 1954 in St. Paul, MN to Harold and Delores (Buboltz) Decker.   He attended elementary and high school in Minnesota before attending Metro Tech in Omaha.  He was a U.S. Marine Corp Vietnam Veteran from 1972 to 1974.  He was united in marriage to Helene Brandel in St. George, MN on August 24, 1974.

Tim owned and operated M&M Towing and Storage.  He was a member of the American Legion Post #129.  He enjoyed fishing with his grandchildren and collecting coins and antiques.