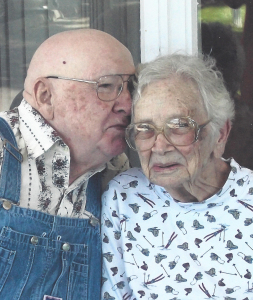 To be scheduled at a later date
Axtell Cemetery ~ Axtell, Nebraska

Wilma Marie Nelson, 93, of Ashland, formerly of Axtell, died Wednesday, December 10, 2014 at the Ashland Care Center. Graveside services will be at the Axtell Cemetery on a later date.

Wilma was born on November 14, 1921 in Kensington, KS to Louis and Ida Stolting. She was raised and received her education in Kensington. She married Robert Nelson on September 14, 1942 in Kensington. Following their marriage they lived in Axtell, NE. Wilma enjoyed crocheting, shopping, and babysitting her grandchildren and great-grandchildren. She was a member of the Seventh-Day Adventist Church in
Kearney.