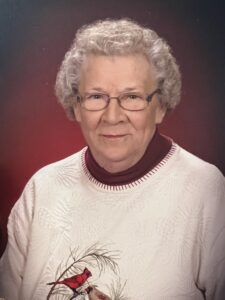 Alyce Marie Coufal, 91, of Wahoo NE, entered into eternal rest on January 10th, 2023 at South Haven Living Center in Wahoo. She was born on October 7th, 1931 in Wahoo to John F. and Rose L. (Noha) Rezac. She attended country school northeast of Wahoo & then St. Wenceslaus Catholic School until 10th grade. She completed her last two years of high school at Wahoo Public High School. After graduation she worked at Lincoln Telephone & Telegraph in Wahoo. She married Robert (Bob) J. Coufal at Camp Chaffee, Arkansas on May 10th, 1952, while he served in the United States Army during the Korean War.

Alyce was a loving wife, mother, grandmother and great-grandmother who enjoyed country living where she gardened, grew flowers and raised some chickens, ducks and had loving dogs and cats. She devoted her life to her family and enjoyed attending her children’s and grandchildren’s activities such as sports, concerts and school activities. She also enjoyed getting together with family throughout the week for dinners as well as having morning coffee at Hinky Dinky, Corner Market & The Sale Barn. She was a member of the American Legion Auxiliary #265 in Colon, NE. In her retirement, she and friends enjoyed occasional trips to the casinos, though never won “the big one.”