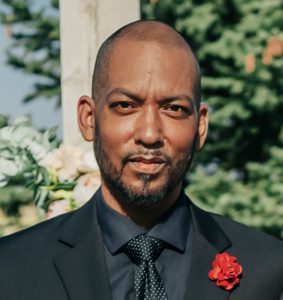 Christian Travis Anderson, known as “AC” to some, passed away on July 21, 2022, at the age of 46, in his childhood home, surrounded by the people who loved him the most.  Christian fought a brave battle with liver failure.

On January 29, 1976, the most beautiful brown skinned, brown eyed baby boy was born to Gaylord and Deyo (Callan) Anderson of Wahoo.  His parents and big sister Heather were ecstatic to bring him home on his mother’s birthday, February 3, 1976. Later, the family welcomed Joshua and Amanda all through adoption. Christian graduated from Wahoo High School in 1994 where he excelled in football, basketball and track.  Christian was voted “Best Dressed” by his high school classmates and boy did they hit the nail on the head.  Christian worked as the general manager of the Men’s Wearhouse for 18+ years, where he was in his element.  He took pride in making himself and his clients look spectacular.  Christian was a true gentleman and won the heart of Carissa (Haselhorst) Anderson in 2002.  Though he fell in love with Carissa, his true love was baby Skylar Rose.  Carissa and Christian were married May 2006 and went on to welcome Christian’s second and third loves, Scarlett Rose and Sunday Rose in 2007 and 2010.  Christian loved his family fiercely, but sadly, Alcoholism, came between him and Carissa.  He tried hard to maintain his sobriety, for his family.

Christian will be missed fiercely by his love Carissa Anderson, daughters Skylar Rose and son-in-law Jaden Jilg Brown, Scarlett Rose and Sunday Rose.  His loving parents Gaylord and Deyo Anderson, sister Heather and husband Chuck Elliott, brother Joshua and wife Kristy Anderson and sister Amanda and husband Tyler Amheiser.  Family was the most important thing to Christian and he adored his nieces Isabel, Abigail, Ellie, Olivia, and Hazel and nephews Callan, Devin, Dominic and Theo. In life and eternity, he will be surrounded by his extended family and close friends.  He eternally joined his grandparents Garwood and Dorothy Anderson and Edward and Ruth Callan in the Kingdom of Heaven.

To celebrate Chirstian and his love of life, we would love to see everyone in colorful attire.

If you are suffering from addiction or feel helpless, please call the Substance Abuse Hotline at 1-800-662-HELP (4357) or 988 for the Suicide and Crisis Lifeline.