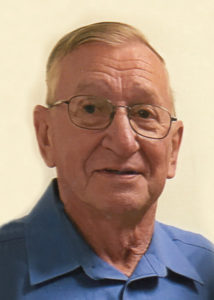 *The Funeral and Rosary will be live streamed on Svoboda Funeral Home Facebook page.

Donald “Herby” R. Ohnoutka, 78 of Ceresco, NE entered into eternal rest Wednesday, March 24, 2021 at Bryan East Medical Center in Lincoln, NE with his family by his side after a courageous fight with COVID-19.  He was born to Edward and Martha (Sloup) Ohnoutka in Weston, NE on June 23, 1942.

Donald graduated from Weston High School in 1960 and immediately enlisted in the United States Army where he was honorably discharged in June 1968 from the Army Reserves.  On July 16, 1966 he was united in marriage to Sherlene Luft at St. John Nepomucene Catholic Church in Weston.

Don worked for Burlington Northern Railroad in Lincoln for 39 years as a machinist and he also farmed with his brother.  After retirement he enjoyed working part-time for Jan Kaufman Auctioneers, Sid Dillion and the Wahoo Super.

Don was a member of Sts. Mary & Joseph Catholic Church in Valparaiso and a member of the American Legion #244 for 46 years.  He was always willing to help in any of their activities.  Don enjoyed playing cards at the Senior Center, helping his sons with their firewood business and going on vacations with friends and family.  His pride was to make sure our acreage looked well taken care of.  He especially enjoyed spending time with his grandchildren, playing yard games and fishing.  Family and friends were all very important to him.  Coaching the Country Districts Basketball team for six years was very special to him and was always proud of his players.

He was preceded in death by his parents, Ed and Martha Ohnoutka; sister, Lucille Christian.